On Deltoid, Tim Lambert explores the similarities between the Discovery Institute’s list of ‘dissenting scientists’ and Inhofe’s list of ‘global warming deniers’.

Inhofe’s list of 650 scientists that supposedly dispute the consensus on AGW reminded me of another list: The Discovery Institute’s list of scientists who dissent from Darwinism, so I thought I’d compare the two lists.

First, numbers. The Discovery Institute’s list has 751 names, while Inhofe’s has only 604. (Not “More Than 650” as he claims – there are many names appearing more than once.)

Third, what sort of scientists are on the lists? Well, the Discovery Institute list has a distinct shortage of biologists, while Inhofe’s is lacking in climate scientists. It does have a lot of meteorologists, but these are people who present weather forecasts on TV, not scientists who study climate.

There are 5 ‘scientists’ who show up on both list, one of them is…

Fascinating how ignorance can be a motivator in so many different areas, from the Intelligent Design argument to the Global Warming denial, science strongly contradicts the claims.

Read more at Inhofe: less honest than the Discovery Institute

Some have raised the question as to whether there is such a thing as Global Warming. 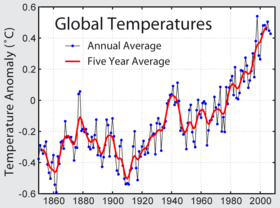 Followed by the CO2 concentration 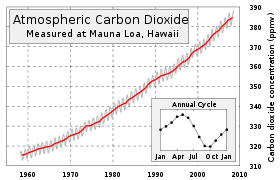 So what do we notice? First of all the temperatures have been rising since as early as the 1970’s. We also know how CO2 concentration and temperature are related and can thus evaluate the temperature response due to CO2.

By modeling the temperature response with and without the human caused forcing components one can show that most of the recent warming is indeed related to human actiity. 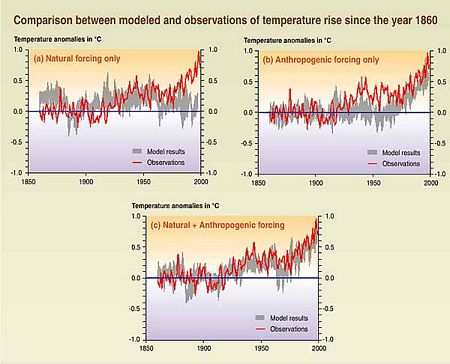