By now everyone has heard how the pro-terrorism group Revolution Muslim threatened South Park creators Matt Stone and Trey Parker by stating “they will probably wind up like Theo Van Gogh,” posting a picture of the murdered film director, and helpfully including their addresses at South Park studios, and the address of Comedy Central’s offices. The threat was issued after South Park’s episode “200” in which all the people that South Park ever made fun of, led by Tom Cruise, teamed up to get back at the town. To protect themselves from the ridicule of South Park citizens, they plotted to capture Muhammad and steal his secret ability to not be made fun of. To avoid breaking the rule against depicting the prophet Muhammad, Stone & Parker dressed Muhammad up in a bear suit.

After the threat was issued, and after Comedy Central began to kowtow to the terrorists by increasing the censorship of the show, the sequel episode “201” revealed that it had not been Muhammad in a bear suit after all, but Santa Claus. Despite the complete non-depiction of Muhammad in the show (in the non-bear-costume shots, Muhammad had been hidden behind a CENSORED box), Comedy Central has now taken even the censored version of episode 201, and the old Super-Best Friends episode, off its website.

Anyway, what’s the connection to evolution? Well, I was watching a CNN discussion which featured a clip scrolling through RevolutionMuslim.com’s blogposts. Here’s the cowardly “kill people who disagree” (I’m paraphrasing, obviously) post… 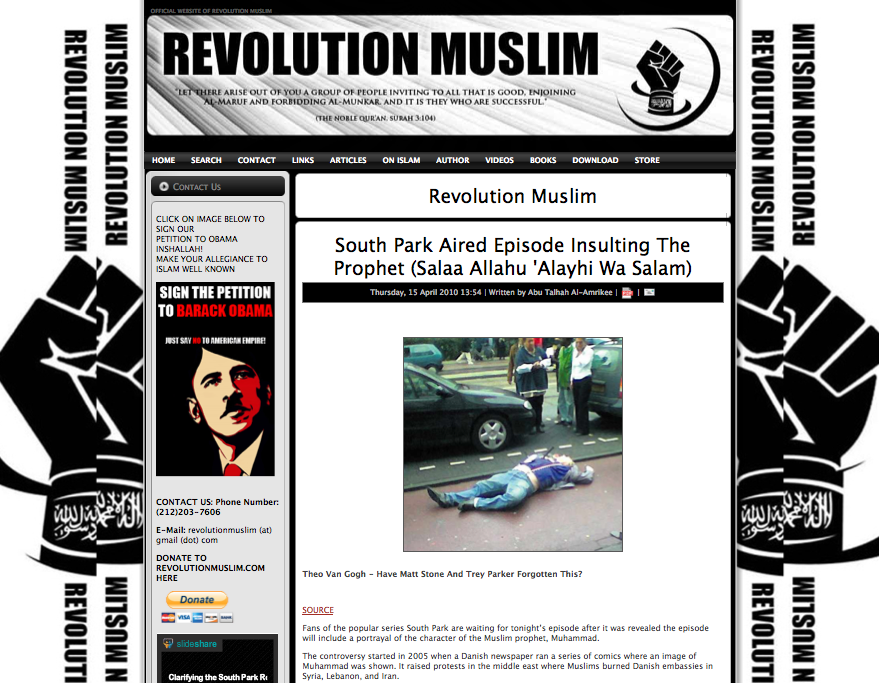 …and, guess what the very next post is? That’s right… 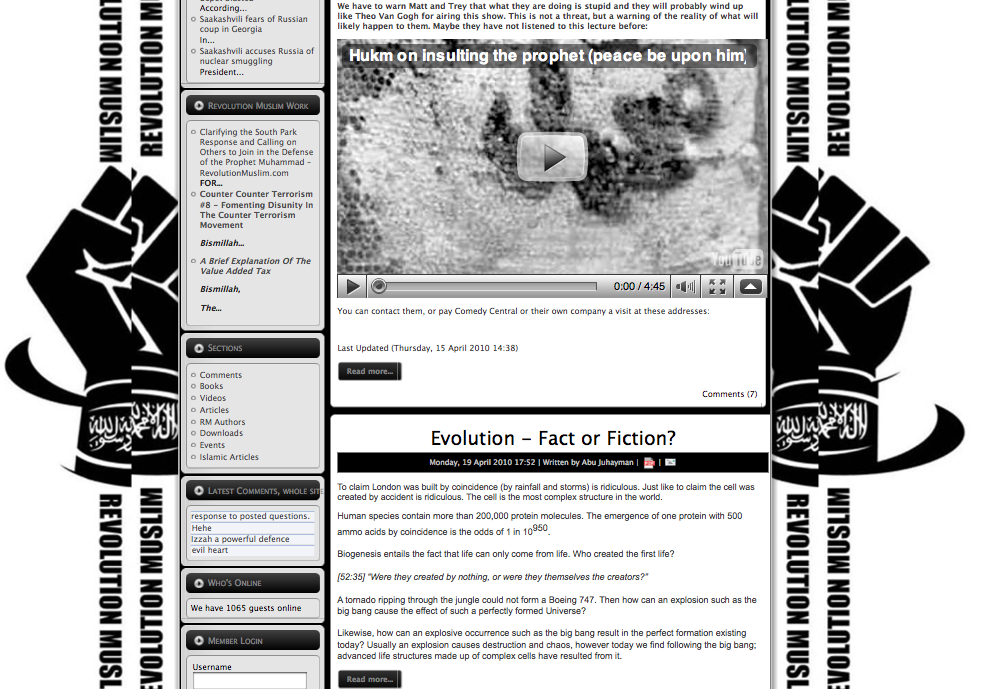 To claim London was built by coincidence (by rainfall and storms) is ridiculous. Just like to claim the cell was created by accident is ridiculous. The cell is the most complex structure in the world.

Human species contain more than 200,000 protein molecules. The emergence of one protein with 500 ammo acids by coincidence is the odds of 1 in 10950.

Biogenesis entails the fact that life can only come from life. Who created the first life?

[52:35] “Were they created by nothing, or were they themselves the creators?”

A tornado ripping through the jungle could not form a Boeing 747. Then how can an explosion such as the big bang cause the effect of such a perfectly formed Universe?

Likewise, how can an explosive occurrence such as the big bang result in the perfect formation existing today? Usually an explosion causes destruction and chaos, however today we find following the big bang; advanced life structures made up of complex cells have resulted from it.

[30:27] “And He it is Who originates the creation, then He will repeat it (after it has been perished); and this is easier for Him. His is the highest description (i.e. none has the right to be worshipped but But, and there is nothing comparable unto Him) in the heavens and in the earth. And He is the All-Mighty, the All-Wise.”

Mutation to DNA can only be negative and harmful, so how could we evolve in DNA positively? If DNA is broken, and mutilated, you could grow an arm on your back, etc. There are only negative mutations.

[22:73] “O mankind! A similitude has been coined, so listen to it (carefully): Verily, those on whom you call besides Allaah, cannot create (even) a fly, even though they combine together for the purpose. And if the fly snatches away a thing from them, they will have no power to release it from the fly. So weak are (both) the seeker and the sought.”

The fossils show species appear in their unique form. There is no gradualism.

All phyla appeared all of a sudden. There is no evidence (fossils) for ancestral forms. They are complex.

Fish breathe by their gills, how would they turn into lungs? How would fins turn into feet?

They say the original flight happened by dinosaurs chasing flies. Where did the ancestors of those flies get their wings?

Fossils of ants 100 million years ago are the same as today.

You cannot underestimate the soft-tissues, the reconstruction of half-man/half-ape is down to the imagination of the sculptor.

The sculptors mould the plaster replication of a human onto the skull of an ape, make it appear to have human eyes and call it “the ancestor of man”.

[17:81] “And say: “Truth (i.e. Islamic Monotheism or this Qur’aan or Jihaad against polytheists) has come and Baatil (falsehood, i.e. Satan or polytheism) has vanished. Surely, Baatil is ever bound to vanish.”

Evolution in itself does not necessitate the non-existence of a Creator because:

[25:2] “He to Whom belongs the dominion of the heavens and the earth, and Who has begotten no son (children or offspring) and for Whom there is no partner in the dominion. He has created everything, and has measured it exactly according to its due measurements.”

[25:3] “Yet they have taken besides Him other aleehaah (gods) who created nothing but are themselves created, and possess neither harm nor benefit for themselves; and possess no power (of causing) death, nor (of giving) life, nor of raising the dead.”

Googling shows that the text is identical to this text posted March 23 on another Islamic website. And the claims are presumably taken straight from Harun Yahya materials, which are known for an extra-strong fixation on the idea that the fossil record shows no evidence of change (and for confusing fishing lures with the real insect). And of course the Stephen Meyer DNA/information argument, the Fred Hoyle Boeing 747 argument, etc., have been copied by the Muslim creationists from the Christian ID/creationist movement.

Anyway, it’s utterly standard antievolution silliness. I wouldn’t draw any particular guilt-by-association conclusions about Christian fundamentalist creationism/ID from this – after all, no one can control what kooks will take up one’s ideas. But I do find it entertaining to ponder what RevolutionMuslim would think if it knew the agenda and political associations of the folks who manufactured the antievolution arguments they use, and vice versa.