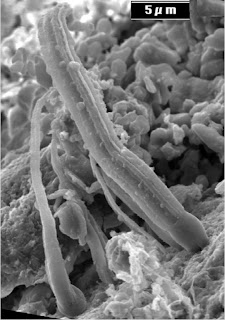 A recent paper published in the Journal of Cosmology has claimed to have discovered evidence of fossil bacteria in a rare subclass of carbonaceous meteorite. The implications of this paper, should it be correct, are enormous and the blogosphere has gone into overdrive discussing it. There are interesting analyses by the Bad Astronomer, PZ Myers and Rosie Redfield.

Rosie Redmond’s analysis is more detailed (and Rosie being the microbiologist who burst the “Arsenic Bacteria” bubble, knows she her stuff), but all posts quickly get to the heart of the matter; the “evidence” is a bunch of squiggly stuff that bears little resemblance to actual bacterial fossils unless you obscure the details by rescaling the images.

(scroll down for an update) 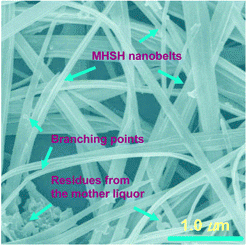 That’s my conclusion too. While I’m not a professional astrobiologist (nor do I play one on TV), it is a hobby of mine and I’ve spent a fair amount of time looking at genuine images of cyanobacterial fossils (it’s all part of my project). And once upon a time I worked (very briefly) as a microbiologist. I’ve also been exposed to far too much X-ray spectroscopy, due to a collaboration with the Chemistry Department in my waking hours.

I won’t cover the ground already covered by Dr. Redmond and the others, but to briefly recap, trying to establish that rods and spheres seen in rock represent actual bacterial fossils is incredibly difficult. These things look like a wide variety of filamentous non-fossil inorganic material (here’s one example) such as you can find in a variety of rocks. From cyanobacterila fossils in ancient earth rocks, to the Alan Hills Martian meteorite, establishing that a suite of features is distinctively biogenic is a nightmare. There have been several reports of supposed bacteria in meteors before with contamination being the culprit (and Dr. Hoover has reported fossil bacteria before as well, to little effect).

One major bugbear is contamination of samples. Bacteria are everywhere on earth, and can get into the most difficult places, so decades old meteorites can be presumed to be contaminated. Dr. Hoover used X-Ray spectroscopy to do elemental analysis on the presumed fossil structures, so as to eliminate the possibility they were modern contaminants. Despite the strange choices of controls (Skin flakes from mummies?), I think he shows fairly convincingly that these structures are not modern contaminants.

What he doesn’t show anywhere near convincingly at all is that they are fossil biological structures. The elemental signature is quite interesting, with high levels of magnesium and sulfur. Almost like, well, magnesium sulfate. It ought to, as the idea put forward in the paper is that the magnesium sulfate in the meteorite ‘s parent body has infiltrated and replaced the organic material of the original bacteria.

There’s a bit of carbon in it, but contamination of magnesium sulfate with magnesium carbonate (which is quite common) would produce this spectrum (see the spectra in the J Phys Chem paper). Also, the whole meteor is full of organic kerogens, which can be produced abiotically (eg the Urey-Miller reaction, or the UV-mediated reactions that make kerogen in the atmosphere of Titan). So merely having a little bit of carbon is no evidence of a biotic origin.

The paper makes much of differences in sulfur abundances between the filaments and the bulk meteorite. However, the elemental profiles and concentrations are virtually identical between the “fossils” and the matrix, and the variation is almost certainly no more than instrumental error (the X-ray spectroscopy person was not impressed and is on the inorganic, magnesium sulfate/carbonate whisker side)*.

So, the evidence that these filaments are fossil microorganisms is a) They are not modern bacteria (good evidence and a good first step) and that b) They are inorganic (this does not establish that they are fossil organisms at all).

Summing up, what has been reported is a bunch of filaments that look like a variety of mineral filaments (especially figures 2 and 3), and don’t look much like actual cyanobacterial fossils at all. To support the existence of extraplanetary life, you are going to need more than what looks like SEM and X-ray images of magnesium sulfate whiskers.

UPDATE: Smoking gun, observations of magnesium sulfate bacteria-like structures forming in the meteors due to post-landing changes in water content. http://onlinelibrary.wiley.com/doi/10.1111/j.1945-5100.2001.tb01827.x/pdf Thanks to commenter Anb at Bad Astronomy for finding the paper

*It would help if they had decent tables, and scaled the X-ray profiles to the same scale, instead of being all over the place. The wildly varying scales of the filament images has also been mentioned, making comparison difficult. And they never actually show elemental analysis of fossil cyanobacteria beyond the amount of nitrogen, you would think this kind of data critical. The control data on the magnesium sulfate is never presented either. The whole paper is a dogs breakfast. **The publicity claims the Journal of Cosmology will publish all the commentaries they have received, but as of writing none have appeared.

UPDATE: Commentaries have now been mounted.