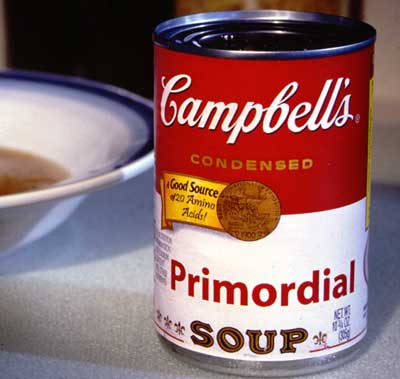 It’s been a while since I wrote about Primordial Soup - and it’s Back in the News!

Stanley Miller gained fame with his 1953 experiment showing the synthesis of organic compounds thought to be important in setting the origin of life in motion. Five years later, he produced samples from a similar experiment, shelved them and, as far as friends and colleagues know, never returned to them in his lifetime.

More 50 years later, Jeffrey Bada, Miller’s former student and a current Scripps Institution of Oceanography, UC San Diego professor of marine chemistry, discovered the samples in Miller’s laboratory material and made a discovery that represents a potential breakthrough in the search for the processes that created Earth’s first life forms.

Former Scripps undergraduate student Eric Parker, Bada and colleagues report on their reanalysis of the samples in the March 21 issue of Proceedings of the National Academy of Sciences. Miller’s 1958 experiment in which the gas hydrogen sulfide was added to a mix of gases believed to be present in the atmosphere of early Earth resulted in the synthesis of sulfur amino acids as well as other amino acids. The analysis by Bada’s lab using techniques not available to Miller suggests that a diversity of organic compounds existed on early planet Earth to an extent scientists had not previously realized.

“Much to our surprise the yield of amino acids is a lot richer than any experiment (Miller) had ever conducted,” said Bada.