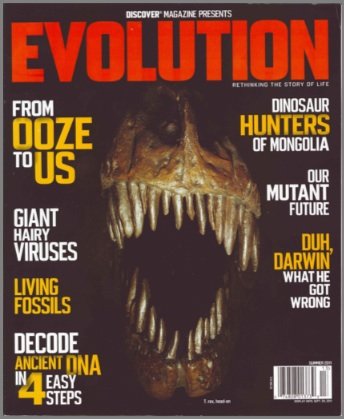 I noticed this while picking up a few items at the local market. It retails at $7.99, and has no commercials, other than a couple of pleas to subscribe to Discover Magazine.

There is no mention of this issue on the web. None.*

Even the fearsome T. Rex, like the one on the cover of this month’s issue, is fascinating largely because you know you’ll never see one in the flesh. The implication of these stuffed critters and mounted bones seems to be that evolution itself is dead too. It seems like a tale of the distant past… Story over. The reality is that evolution is very much a work in progress - and its awesome power is still changing how we understand the living world. Cancer turns out to be an evolutionary disease, for example. … The vital force of evolution is also evident in the growing problem of antibiotic resistance (page 80). … Our ideas about evolution are evolving too, shaped by new research. Scientists have only begun to wrap their heads around epigenetics, the way DNA can be chemically modified in response to diet, stress, or other environmental factors in ways that permanently change how genes are activated. … Evolution is very much alive and so is the science of evolution. Read on: A whole new look at the history (and future) of life awaits. - Kat McGowan, editor.

Creationism is not the focus of the issue, and creationists are mentioned only a few times in passing. One of these appears in an article on why Ernst Haeckel has been relegated to footnotes, while Charles Darwin is still in headlines:

Haeckel embellished some of his illustrations to emphasize similarities between the embryos of unrelated creatures. In doing so, he sowed enduring confusion: Creationists today still point to these drawings as evidence that evolution is a fraud.

Another rare mention: Bruno Maddox describes one of Darwin’s early blunders, involving not recognizing glaciation’s role in the formation of Glen Roy in the Scottish highlands. While not flattering to the young Darwin (“Not just a little bit wrong. A lot wrong. … And he could, additionally, be a real pain in the you-know-what about it.”), Maddox tosses this out about hiking to Glen Roy:

Certainly if you’re coming from the States - from Petersburg, Kentucky, say, or Dayton, Tennessee, or any other of the thousand places where you would be safer lighting a Marlboro off a burning American flag than being caught with a copy of On the Origin of Species - you’re going to find it quite a hike.

Asides from those brief mentions, the issue is Intelligent-Design and Discovery-Institute free, is refreshingly un-apologetic, and spends its pages packing in a lot of neat science. Included in the issue are articles on Stanley Miller’s new experiments, viruses and their role in the startup of Life, living fossils, marsupials, dinosaur digs, decoding your megafaunal genome, why we are human, how cattle affected human genetics, hot spots for evolutionary observations, superbugs, and control of evolution itself.