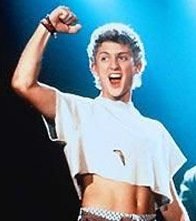 The second BILL is an entertaining and accessible introduction to evolution, with a focus on Mr. Darwin himself.

BILL the second is “Endless Forms Most Beautiful,” by Sean Carroll. (Not the cosmologist or the biologist formerly in Joe Thornton’s lab and currently at Harvard, but the evo-devo thinker who is Vice President for Science Education at the Howard Hughes Medical Institute [HHMI].) Carroll’s talk is the first in a four-part series on evolution, the 2005 Holiday Lectures sponsored by HHMI. The Holiday Lectures are probably an exaptation of The Royal Institution Christmas Lectures that gave us our inaugural BILL.

Here are some things to look for and think about:

The lecture begins and ends with comments by Tom Cech. If you just want Carroll’s talk, start at about 4:00, and skip to 6:50 if you don’t want the intro video on Carroll’s background. And there’s a transcript here.