James F. Crow died peacefully in his sleep in Madison, Wisconsin on January 4th at the age of 95, having nearly reached his 96th birthday. Jim, as everyone who knew him called him, was one of the most important population geneticists of the 20th century, a major figure in the generation that followed Fisher, Wright, and Haldane. 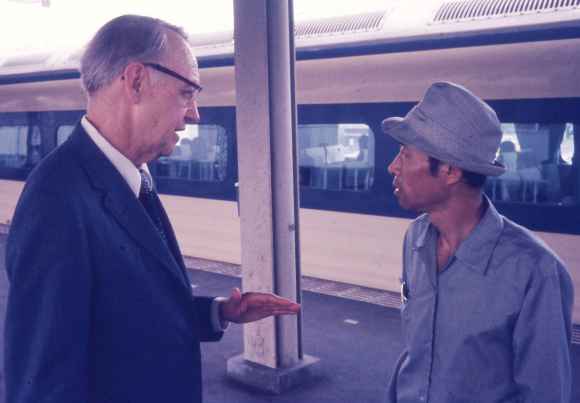 His father was a cytologist who did graduate work soon after the rediscovery of Mendel’s work. Jim did his graduate work in the 1930s at the University of Texas, where he had gone in hopes of working with H. J. Muller (who had, however, already left). He later had opportunities to work with Muller, and always considered himself primarily influenced by Muller. After working at Dartmouth College during and after World War II, he moved to the University of Wisconsin - Madison, where he spent the rest of his career. His many honors included election to the National Academy of Sciences and as a Foreign Member of the Royal Society.

He was famous as a teacher and mentor of numerous population geneticists, of whom I am one. In the 1950s he started traveling to Japan; he had many Japanese collaborators and students. Motoo Kimura was his Ph.D. student, and began a longtime collaboration with him. In 1970 they published An Introduction to Population Genetics Theory, which became the standard textbook of that field. Jim’s plain and folksy speaking style was the same as his writing style – he was enormously prolific and famous for his clear exposition. Among its many effects on the field, the book popularized Gustave Malécot’s way of defining inbreeding coefficients and using them to compute covariances among relatives for quantitative characters.

Jim’s many papers included major work on mutational load and other forms of genetic load, the concepts of inbreeding and variance effective population number, and expanding on R. A. Fisher’s and H. J. Muller’s theory of the evolutionary advantage of recombination. In the 1950s and early 1960s he was a major participant in the debate over genetic variation in natural populations, arguing against Theodosius Dobzhansky’s view that attributed it largely to balancing selection. With Motoo Kimura in 1964 he derived the expected heterozygosity brought about by neutral mutation, and he played a major role in assisting Kimura in effectively presenting his case for neutral mutation. He helped bring Sewall Wright to Madison in 1955, and Jim and Ann Crow were important as friends during Wright’s later years.

In addition to these he contributed numerous insights in his many papers. He was interested in all of genetics, and read its literature widely. As an invariably polite, surprisingly modest, and easily approachable mentor who was always interested in clarifying and simplifying models, he had a great effect. Through his lab passed much of a generation of theoretically-inclined population geneticists. If your name was Morton, Kimura, Maruyama, Hiraizumi, Kerr, Sandler, Hartl, Langley, Gillespie, Ewens, Li, Nagylaki, Aoki, Lande, Bull, Gimelfarb, Kondrashov, Phillips, or Wu, you were among the many who were in Jim’s debt, and remember him warmly as friend and role model.