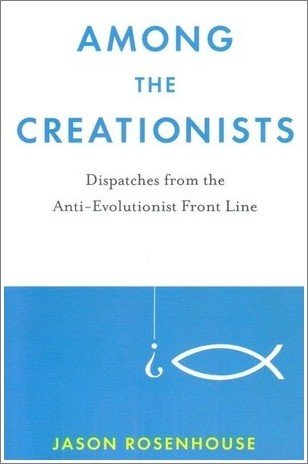 Jason Rosenhouse moved from the east coast to Kansas for a postdoc. He had studied a bit about creationism while a graduate student at Dartmouth, so it would be an exaggeration to say that he was surprised to learn that not everyone in Kansas was a liberal Democrat (even by today’s standard of liberalism). Nevertheless, for reasons that are not made completely clear, he humored his inner anthropologist and attended a handful of creationist conferences over a period of several years. The result is the splendid book Among the Creationists: Dispatches from the Anti-Evolutionist Front Line, which both shows creationists as regular people, just like scientists, and also takes them seriously, without condescension or sarcasm.

Not that Rosenhouse cuts them any slack. He gets up to the microphone and asks pointed questions, and he is completely open about who he is and what he believes. He mingles with the conference attendees and is impressed by how very pleasant they are; he is pleasant in return, except for one apparently unfortunate interaction with Ken Ham. Nevertheless, however pleasant the creationists may be, Rosenhouse makes clear that he and his interlocutors are always talking past each other, and his critiques have virtually no effect - except occasionally, when he sees a young student listening intently and thinks he may have planted some seeds of doubt.

The book is not exactly a travelog but rather is written as two interwoven strands. The first strand is, well, a travelog; the second examines scientific, philosophical, and theological topics that are prompted by the discussion of a particular conference. Rosenhouse makes clear that, however ingenuous the creationists may be, they are flatly wrong. But neither is he afraid to take on philosophers and others on his own side. In that, he is not entirely successful, partly because of the complexities of the arguments and length of the book. I remember being frustrated once or twice when he stopped an argument abruptly and simply deferred to one of his sources. That is OK in a short scientific paper, where readers are expected to check your references, but it seems to me it is less successful in a popular book.

Rosenhouse finds that creationists believe as they do, in part, because they cannot accept a world in which a loving and just god brings about so much pain and destruction in order to create a world by natural selection – so creationism is sort of a poor man’s theodicy (my characterization, not Rosenhouse’s). Speaking of theodicy, Rosenhouse devotes an entire chapter to theodicy and takes on quite a spectrum of theologians with moderate success. One solution he does not discuss is to discard one of the three O’s - omniscience, omnipotence, and omnibenevolence.

Taking ancient or outdated beliefs and practices and expressing them or reinterpreting them in modern terms is often called transvaluation (as when I tell my Orthodox Jewish cousin that I keep kosher by not eating certain foods that are bad for my health or for the environment; it drives her crazy). Rosenhouse, who is culturally Jewish, enjoys the Jewish holidays and other sancta, and probably transvalues the blessings over bread and wine, else he would feel hypocritical reciting them. Nevertheless, he takes a dim view of, for example, an argument that reinterprets original sin as the selfishness that drives evolution. I will not go into detail, but this kind of thinking ultimately leads Rosenhouse to conclude that the creationists are essentially correct and that evolution and Christianity are not compatible. In this sense, he has the same narrow view of religion as the creationists – that it is all or nothing – and he risks alienating moderate theists who are otherwise on his side.

Among the Creationists is well written, well formatted, and well organized (though I thought that most of the content of the endnotes should have been incorporated into the text). It has a good list of references and a good index. It is barely 230 pages long, and it is a pleasure to read. May I recommend that anyone with an interest in creationism go straight to your local independent book dealer, buy a copy, and read it through?