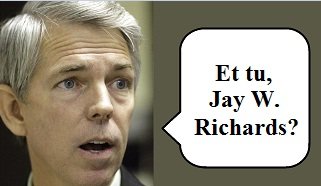 Well, this is interesting! Pseudo-historian David Barton, whom we last heard from here on the Thumb declaring that America’s Founding Fathers had considered evolution, and rejected it for creationism, has had his newest book examined and rejected by a group of conservative authors headed by the Discovery Institute’s Jay W. Richards.

The book, which argues that Thomas Jefferson was an enthusiastic orthodox Christian who saw no need for a wall of separation between church and state, has attracted plenty of criticism since it appeared in April, with an introduction by Glenn Beck. But the death knell came after Jay W. Richards, a senior fellow at the Discovery Institute and the author, with James Robison, of “Indivisible: Restoring Faith, Family and Freedom Before It’s Too Late,” began to have doubts and started an investigation.

The Times blog refers to a detailed August 7th, 2012 article by Thomas Kidd at World Magazine, which notes

Richards says in recent months he has grown increasingly troubled about Barton’s writings, so he asked 10 conservative Christian professors to assess Barton’s work.

Their response was negative. Some examples: Glenn Moots of Northwood University wrote that Barton in The Jefferson Lies is so eager to portray Jefferson as sympathetic to Christianity that he misses or omits obvious signs that Jefferson stood outside “orthodox, creedal, confessional Christianity.”

More on the story in an August 10th report by Tim Murphy of Mother Jones, “The Right’s Favorite Historian Comes Apart at the Seams” :

Barton has turned the study of America’s Christian roots into a lucrative business, hawking books and video sermons, speaking at churches and political confabs, and scoring a fawning New York Times profile and interviews on the Daily Show. He’s got friends in high places: “I almost wish that there would be like a simultaneous telecast and all Americans would be forced–at gunpoint no less–to listen to every David Barton message,” Mike Huckabee told an Evangelical audience in March of 2011. “I never listen to David Barton without learning a whole lot of new things,” Newt Gingrich told conservatives in Iowa that same month.

That’s probably because much of what David Barton writes seems to have originated in David Barton’s head.

On Thursday, Barton’s publisher announced that it was recalling Barton’s newest book, The Jefferson Lies, from stores and suspending publication because it had “lost confidence” in the book’s accuracy. That came one day after NPR published a scathing fact-check of Barton’s work, specifically his claim that passages of the Constitution were lifted verbatim from the Bible.

Wow. We know how much the Discovery Institute needs to feed on disinformation and polemics. That one of their leaders had to reject Barton’s book is a strong indication that the book must be really, really, _really_bad!