It’s time for the annual birthday greeting to Jean Baptiste Pierre Antoine de Monet, Chevalier de Lamarck, born 1 August 1744. Born into the impoverished nobility, he distinguished himself in the army, then had to leave military life because of a peacetime injury. In Paris, he started writing books on plants and ended up as Professor in the Natural History Museum. He was the great pioneer of invertebrate biology (he coined the terms “invertebrate” and “biology”). But of course he is best known as the first major evolutionary biologist, who propounded a theory of evolution which had an explanation for adaptation. (A wrong explanation, but nevertheless an explanation).

This time let’s use an image of the tree of animals, from his Philosophie Zoologique (1809): 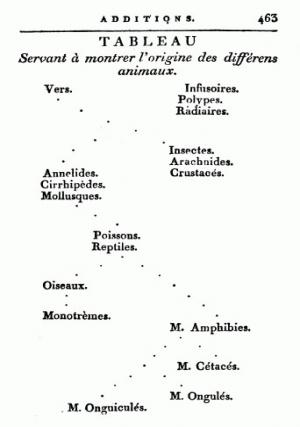 Of course, it goes without saying that Lamarck was not responsible for inventing or popularizing “Lamarckian inheritance”. He invoked it but everyone already believed it. And to add one last jibe: epigenetics is not in any way an example of the use-and-disuse mechanisms that Lamarck invoked.