One thing I’ve loved about living in Australia this past year is how much more generally pro-science the culture seems to be (PT blogmeister Reed Cartwright was just in Canberra to visit collaborators, but sadly he forgot Prof. Steve Steve). We have the annual Australian National Science Week coming up next month – can you even imagine having a National Science Week in the United States? 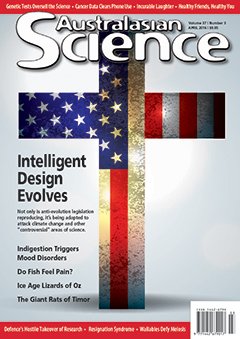 Another thing I’ve loved is how there seem to be many independent media outlets interested in science. I got to write a short popular article on the Evolution of Antievolutionism paper, which ended up on the cover of Australasian Science, for instance, and participate in several other talks or radio shows.

The most recent radio show was:

Get your science on Fuzzy Logic Science Show from Canberra’s Radio 2XX 98.3FM

Dr Nick Matzke is an evolutionary biologist who’s been mapping the large scale history of life (the phylogenetic tree).

Phil Hore is from the National Dinosaur Museum.

Lots of good things on the way at National Science Week.