Update: I’ve added some substantial comments 81029 and 81054 that might be lost in the comment roll, but add some important perspective to Behe’s arguments.

Michael Behe is known as the author of the concept of Irreducible Complexity (IC, but see [note 1]). However, he has given several different, not entirely consistent, definitions of IC. Everyone is familiar with the “multiple parts” definition, fewer will be familiar with the “neutral mutational steps” definition (1) and fewer still with the idea that amino acids interactions themselves are IC (2, see my critique of this). Indeed, Behe’s recent paper with David Snoke (3) relied on a combination of the last two definitions (see our critique), and Behe also used the latter definition in the Dover trial (3).

Behe has claimed that he will accept that a system is not IC if someone can give a mutation-by-mutation account, with selective coefficients for each mutation, for that system. Now in general, this is just not practical, because it is very difficult to reconstruct these systems even for bacterial antibiotic resistance, where we can keep a close eye on the mutations, and can readily measure the effect of the mutations. In fact, for resistance to cefotaxamine, 5 mutations are required, and there are 18 high probability pathways to this resistance (5), so we have little idea of the historical path the system took. Reconstructing the actual mutation-by-mutation path of any given feature, especially in organisms that are not as easy to grow or test as bacteria (and given that many intermediate organisms may be extinct), is a daunting task. By requesting a ludicrous amount of detail, Behe has tried to insulate himself from the evidence for evolution.

In a magnificent paper, Bridgham, Carroll and Thornton (BCT, 4) have tackled the daunting task of reconstructing evolutionary pathways head on, reconstructing ancient proteins in the process. The article looks at one of Behe’s key examples, protein-binding sites for small molecules. The ability of proteins to bind small molecules is critical for organisms to function, because enzymes bind small molecules as part of metabolism, receptors proteins bind small hormone molecules to initiate cell signaling and many small molecules bind to a variety of proteins to modify their functions. For example, in the Behe and Snoke paper (3), they examine the ability of the oxygen carrying protein haemoglobin to bind the organic phosphate molecule 2,3-diphosphoglycerate (DPG, which modifies the oxygen binding capacity of haemoglobin).

The BCT paper looks at the binding site of the receptors for some steroid hormone receptors, those for mineralocorticoids (MR) and those for glucacorticoids (GR). Receptors are proteins whose amino acid chains fold in such a way as to produce a pocket where particular small molecules (hereafter called ligands) bind. These pockets can be incredibly selective, and the term “lock and key” is often used. The small molecule fits into the protein receptor like a key into a lock (this is an oversimplification, as the molecules are flexible, and are “floppy” keys and locks, and the electrostatic charge and lipid solubility of the molecule comes into play, but it helps visualization).

Lock and key binding illustrated with the molecule adrenaline (right) 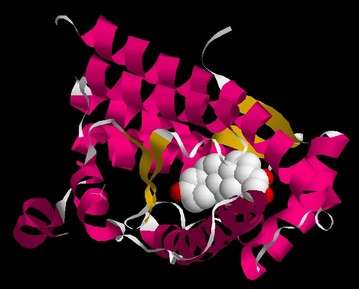 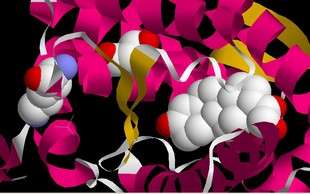 The aldosterone receptor (as helix and strings) showing aldosterone (the white collection of balls) binding in the pocket. On the right is a close-up, with the amino acids that are mutated to make the GR receptor shown as balls as well.

BCT approach this in a very elegant way. Using phylogenetic analysis of the existing sequences of GR and MR receptors they were able to reconstruct the sequence of the receptor ancestral to the GR and MR. They expressed this reconstructed gene in cells, and tested the sensitivity to aldosterone and cortisol. The ancestral receptor responded to both aldosterone and cortisol. By a combination of phylogenetic analysis and mutagenesis they isolated two mutations that converted the ancestral receptor into a GR (serine to proline at position 106 in the chain, and lysine to glutamine at position 111). By studying their properties, and comparing them to MR and GR receptors from hagfish, sharks, bony fish and tetrapods, they determined that the seriene to proline mutation came first, followed by the lysine to glutamate. 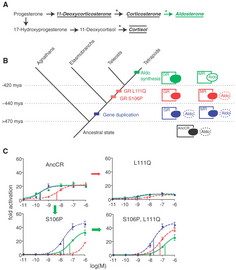 Click Image to enlarge Fig. 4. Evolution of specific aldosterone-MR signaling by molecular exploitation. (A) Synthesis pathway for corticosteroid hormones. Ligands for the ancestral CR and extant MRs are underlined; cortisol, the ligand for the tetrapod GR, is overlined. The terminal addition of aldosterone is in green. Asterisks, steps catalyzed by the cytochrome P-450 11ÃŸ-hydroxylase enzyme; only the tetrapod enzyme can catalyze the step marked with a green asterisk. (B) MR’s aldosterone sensitivity preceded the emergence of the hormone. The vertebrate ancestor did not synthesize aldosterone (dotted circle), but it did produce other corticosteroids (filled circle); it had a single receptor with affinity for both classes of ligand. A gene duplication (blue) produced separate GR and MR. Two changes in GR’s sequence (red) abolished aldosterone activation but maintained cortisol sensitivity [see (C)]. In tetrapods, synthesis of aldosterone emerged due to modification of cytochrome P-450 11ÃŸ-hydroxylase. mya, million years ago. (C) Mechanistic basis for loss of aldosterone sensitivity in the GRs. Phylogenetically diagnostic amino acid changes that occurred during GR evolution were introduced into AncCR-LBD by mutagenesis. Dose-response is shown for aldosterone (green), DOC (blue), and cortisol (red). The double mutant (bottom right) has a GR-like phenotype. Arrows shows evolutionary paths via a nonfunctional (red) or functional (green) intermediate. From Bridgham JT, Carroll SM, Thornton JW. Evolution of hormone-receptor complexity by molecular exploitation. Science. 2006 Apr 7;312(5770):97-101. under “Fair Use” and non-profit educational provisions.

Deriving the ancestral sequence, determining the mutations, their temporal sequence and their relative selectability is all in all a virtuoso performance. And it directly addresses the issue Behe raised with the evolution of the DPG binding site (3, see our critique).

Behe and the Discovery Insitute have reacted quickly and negatively to this paper. But in doing so they display a curious amnesia. Behe says:

I certainly would not classify their system as IC. The IC systems I discussed in Darwin’s Black Box contain multiple, active protein factors. Their “system”, on the other hand, consists of just a single protein and its ligand.”

Contrary to what the authors assume receptor-hormone pairs do not constitute irreducibly complex systems. The receptor-hormone pair is only a small component of a signal transduction circuit that regulates other complex physiological processes. For such pairs to have any selective or functional advantage many other protein components have to be present, including the other components of a signal transduction circuit and the physiological processes that such circuits regulate. http://www.discovery.org/scripts/viewDB/index.php?command=view&id=3406

Yet, and I emphasise this again, Behe himself has argued in sworn testimony to the Dover trial that they do constitute IC systems (3). Don’t the DI fellows follow each other’s work?

Once again we see that the Intelligent design promoters are willing to move the goal posts to avoid refutation of their ideas. Molecular IC is Behe’s own invention, and he can’t ignore his idea when it is disproved.

[Note 2] Technically, the GR receptor is an example of subfunctionalisation, where a generalist receptor becomes more selective. This is quite important in evolution. Behe’s exemplar, binding DPG in haemoglobin, is a result of a reduction of specificty, the ATP binding site now binds DPG. When Meyer complains that the BCT paper does not generate a new protein fold family, well, neither does Behe’s DPG example, which Behe claims demonstrates IC. (ironically, there is also a recent paper showing in more detail how protein fold familes evolve. Zeldovich KB, Berezovsky IN, Shakhnovich EI. Physical origins of protein superfamilies. J Mol Biol. 2006 Apr 7;357(4):1335-43.)

[Note 3] added 11 April. Hagfish, Sharks and bony Fish don’t actually have aldosterone, this is only found in tetrapods, but their receptors bind adlosterone and are activated by it. In non-tetrapod vertebrates, 11-deoxycorticosterone (DOC) plays the role of aldosterone.

“Thus in a real sense the disulfide bond is irreducibly complex, although not nearly to the same degree of complexity as systems made of multiple proteins” “The problem of irreducibility in protein features is a general one. Whenever a protein interacts with another molecule, as all proteins do, it does so through a binding site, whose shape and chemical properties closely match the other molecule.”

There are none that use that phrase, but as I indicated in my direct testimony, that I regard my paper with Professor David Snoke as to be arguing for the irreducible complexity of things such as complex protein binding sites. Emphasis added IFM

“So the point is that those little colored squares [amino acids] are enormously complex in themselves, and further the ability to get them to bind specifically to their correct partners also requires much more additional information. It is not a single step phenomenon. You have to have the surfaces of two proteins to match.”

[I corrected a few typos – Nick]