New Mexico was one of the states considering anti-evolution legislation based on the Discovery Institute’s “Model” bill (at the Institute’s “Academic Freedom” site) Like bills in Iowa and elsewhere around the country, this legislation has foundered, and literally died without being heard in committee during this year’s 60-day session which just ended ( noon on Saturday, March 21st).

Similar legislation was put forth in New Mexico in 2007, but did not get out of committee. (See this Panda’s Thumb report for the details). That year, similar bills were carried by “Dub” Williams in the NM House, and Steve Komadina in the NM Senate. After hearing from several scientists and teachers opposed to the bill at the 2007 hearings, Rep. Williams graciously tabled his version of the bill. Sen. Komadina might have sponsored the bill again this year, but lost his 2008 re-election bid. The local Intelligent Design/Creationist community found a new supporter in Sen. Kent Cravens, who introduced the bill, “USE OF SCIENCE IN TEACHING BIOLOGICAL ORIGINS,” on Feb. 2nd, 2009. With the session ending soon, Sen. Cravens apparently asked that it be heard by the Senate Education committee on Monday, March 16th. But, by the time the hearing was supposed to start, word came that it had been cancelled. 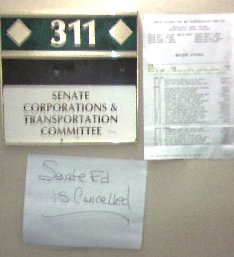 To promote the bill, local anti-evolutionists abandoned the slick-looking “New Mexico Science Foundation” site used in 2007 (see “Cheshire Cat” Creationism in New Mexico…”, and started a new site called “Origins Education” . Were the New Mexico and Iowa bills based on the Discovery Institute’s model? Of course. Consider this similar phrasing in the DI, Iowa, and New Mexico versions of the legislation:

Model Bill: Students may be evaluated based upon their understanding of course materials, but no student in any public school or institution of higher education shall be penalized in any way because he or she may subscribe to a particular position on any views regarding biological or chemical evolution.

Iowa Bill: “Students shall be evaluated based upon their understanding of course materials through standard testing procedures,” they “shall not be penalized for subscribing to a particular position or view regarding biological or chemical evolution.”

(For a complete analysis of the entire bill by Kim Johnson, click here or here.) Is the Model Legislation the work of the Discovery Institute? Of course - as a simple WHOIS inquiry will verify.

Although an amended version of the bill was never published, it appears that the sponsor planned to modify the bill to include language from a similar Louisiana bill, SB733, which was adopted by that state’s legislature and signed by Gov. Bobby Jindal in June of 2008.

The Louisiana bill declares that

The State Board of Elementary and Secondary Education, upon request of a city, parish, or other local public school board, shall allow and assist teachers, principals, and other school administrators to create and foster an environment within public elementary and secondary schools that promotes critical thinking skills, logical analysis, and open and objective discussion of scientific theories being studied including, but not limited to, evolution, the origins of life, global warming, and human cloning.

just asks that if there’s a controversial scientific theory being presented, that a teacher can’t be reprimanded or fired or downgraded or any way harmed if the teacher happens to mention that there are other theories of controversial scientific nature, to include biological evolution, human cloning, global warming, you name a dozen different things.

Why is human cloning included? Unlike evolution or global warming, whose basic validity is claimed to be “controversial” by the religious right, the controversy of human cloning revolves on whether or not it should be attempted, not whether or not it is even possible. As Prof. Barbara Forrest explained on the March 14th edition of NMSR’s Science Watch radio show, cloning and global warming are added because they, like evolution, are things despised by the religious right. The reference to “human cloning” is just a surrogate for “stem cells,” according to Prof. Forrest. Also, by adding more than just evolution and origin of life topics, the bill’s sponsor could claimed that he was not singling them out, should this show up in a court of law.

The New Mexico Public Education Department (PED) published an analysis of SB433, which the legislature cited on the bill’s status page:

The PED analysis raises these points, among others: Although the bill’s definition of “scientific information” excludes information derived from religious or philosophical writings, beliefs or doctrines, SB 433 goes on to say that scientific information may have religious or philosophical implications and remain scientific in nature. The PED analysis states that this point would allow the teaching of theories of biological origins such as intelligent design or creationism. PED quotes the National Academy of Sciences and Institute of Medicine of the National Academies, ‘There is no scientific controversy about the basic facts of evolution…arguments that attempt to confuse students by suggesting that there are fundamental weaknesses in the science of evolution are unwarranted based on the overwhelming evidence that supports the theory. Creationist ideas lie outside the realm of science, and introducing them in science courses has been ruled unconstitutional by the U. S. Supreme Court and other federal courts.” Pursuing this legal point, the PED analysis cites several court cases in which efforts “to impose a religious view of biological origins into the curriculum,” as SB 433 seems to do, have been found to violate the Establishment Clause of the US Constitution. This analysis also says that SB 433 implicates Article 2, Section 11 of the state constitution, which guarantees freedom of religion, and Section 22-13-15 NMSA 1978, which prohibits the teaching of sectarian doctrine in public schools. Finally, the PED analysis suggests that enacting SB 433 would invite litigation.

And so, yet another Discovery Institute initiative has cratered. This will only be a temporary setback for New Mexico’s creationists, who will no doubt turn up with more “academic freedom” initiatives at the New Mexico Roundhouse, school boards, city councils and the like. Also, expect continued evolution of the language as is occurring in other legislatures. There’s a new bill in Texas in which anything scientific is fair game for substitution of superstition and the supernatural. H.B. No. 4224 reads in part

Students may be evaluated based upon their understanding of course materials, but no student in any public school or institution shall be penalized in any way because he or she subscribes to a particular position on scientific theories or hypotheses…

Sound familiar? It all may sound so reasonable, but the Discovery Institute’s “academic freedom” poison pills are deadly, as far as real science is concerned.