Those of you who can’t get enough of the Trial of the (21st) Century are very lucky. This spring, three books are coming out about the Kitzmiller v. Dover case. Out yesterday was Ed Humes’s Monkey Girl: Evolution, Education, Religion, and the Battle for America’s Soul. On April 1, we will have 40 Days and 40 Nights: Darwin, Intelligent Design, God, OxyContinÂ®, and Other Oddities on Trial in Pennsylvania by Matthew Chapman. And on May 18 we will have Gordy Slack’s The Battle Over the Meaning of Everything: Evolution, Intelligent Design, and a School Board in Dover, PA. Yet more books/documentaries/movies are in the offing.

Although only Humes’s book Monkey Girl is out, I was lucky enough to be interviewed for each of them, and have gotten to know the authors, and so I have an idea about which direction each one takes. Although they all center on the trial, each comes at it from a different angle, so you are just going to have to support the economy and buy all three. 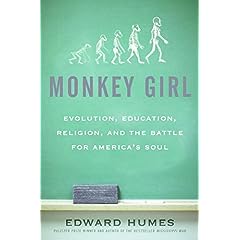 Ed Humes’s Monkey Girl is the crime drama version of the Kitzmiller case. Humes, who won a Pulitzer in 1989 for investigative reporting about the U.S. Military, reviews the evolution fights that have occurred around the country since 2000, when the ID movement started to get national attention during Kansas’s “Evolution War I” (“Evolution War I” was the fight over the deletion of evolution from Kansas’s science standards in 1999-2000; “Evolution War II” was 2004-2006 fight over ID-friendly science standards), and continuing through the No Child Left Behind Act, the Ohio Board of Education, etc., up to Dover. Humes gives a detailed anatomy of the case from the beginning – events which were crucial although this was not always clear at the time, and this trains readers up to understand how the dramatic moments at the trial came to pass.

For example, a preliminary scuffle in the case was the issue of whether or not the plaintiffs would file for a Temporary Restraining Order (TRO) in January 2005. The plaintiffs took depositions of the key Dover Area School Board members to gather evidence, but Buckingham and Bonsell denied under oath that they had originally talked about “creationism” before they talked about “intelligent design” (despite the fact that this was explicitly reported in the newspapers), and they said they didn’t know who had donated the book Of Pandas and People. As a result, the plaintiffs declined to file for a TRO and moved forward with plans for a full trial with a full discovery period. Of course, it turned out that the board members were lying and this is what led to some of the fireworks at trial. The book is also excellent for the culture and historical context of the case – and a tour with a Pennsylvania geology guide gives the really deep background.

Reviews and articles are already coming out about Monkey Girl, see edwardhumes.com, the York Dispatch, the York Daily Record (includes the “ruling” – the blurb – from the Hon. Judge John Jones III himself), Pharyngula, and a long and detailed review from Red State Rabble.

Nick “Trial Geek” Matzke Watch: guess who one of the geeks is in the chapter entitled “Send Lawyers, Geeks and Money”?

40 Days and 40 Nights: Darwin, Intelligent Design, God, OxyContinÂ®, and Other Oddities on Trial in Pennsylvania 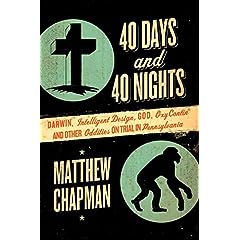 Matthew Chapman’s title was announced first (as far as I know), and he got the best one: 40 Days and 40 Nights. This is, of course, based on the banter at the very end of the fortieth day of the trial, which seemed to me to be clear proof that we were actually on a movie set and the director was about to jump out and yell “cut!” Chapman brings a unique perspective to the case as the great-great-great-great grandson of pottery magnate Josiah Wedgwood (not Wedgewood), perhaps better known as the great-great-grandson of Charles Darwin himself. The book is an expansion of Chapman’s article in Harper’s Magazine.

As Chapman admits early on, he did not inherit the science proclivities that are common throughout the rest of the Darwin family. You do not read 40 days for ponderous analysis, you read it for the humor. Chapman’s specialty is character, and he manages to peg just about every participant with a few incisive remarks. The effect is hilarious, especially if you know the people involved. Plaintiffs’ attorney Steve Harvey? “[T]he best suits in the trial.” Eric Rothschild? “One might imagine that as a geeky child he had encountered some bullying and was not about to let it continue into adulthood.” During the trial, Chapman sat in the jury box with the other reporters and glowered at the ID witnesses. At least, that’s what I had thought he was doing. During the cross-examination of Scott Minnich, Harvey brought up the fact that Richard Bliss, an education specialist with the Institute for Creation Research, had been invoking the “intelligent design icon,” the bacterial flagellum, a generation ago. Most observers were thinking, “Wow, so that flagellum argument really isn’t new at all, is it?” But not Chapman. No, at that moment Chapman was focused on the question of what would possibly lead someone to name their child “Dick Bliss.”

Nick “Trial Geek” Matzke Watch: guess who is described thusly: “usually looked as if he had just rolled out of bed.” True enough, I’m afraid.

The Battle Over the Meaning of Everything: Evolution, Intelligent Design, and a School Board in Dover, PA 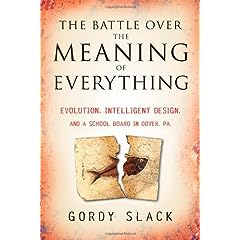 Finally, we have well-known science journalist Gordy Slack’s The Battle Over the Meaning of Everything: Evolution, Intelligent Design, and a School Board in Dover, PA. This book is not due out until May, but I’m sure it will be worth waiting for. For a preview, see his article for Salon.com on the Kitzmiller trial (this article, which got some amazing quotes from Richard Thompson, was cited in the trial transcript just a few days later, to the embarassment of the Defense).

Gordy has a personal interest in the story: Some years back, his dad experienced a midlife crisis, was born again, and became a rabid ID fan in the early years of the ID movement. Slack, a science student and then a professional science journalist, was not very sympathetic to this, and the two of them have debated this issue for years. At one point, Slack senior even set up an appointment for father and son to have lunch with Phillip Johnson on the U.C. Berkeley campus. Of the three authors, I suspect Gordy may be closest to the PT posters and readers in terms of perspective, as someone who has tracked the ID movement and its forays into education, and who has personally wrestled with creationism and how to interact with creationist family members.

Nick “Trial Geek” Matzke Watch: Too early to say, but in discussing my role in the case with Gordy, I said something about how the obscure obsession of a creationism-debating internet nerd suddenly became a special superpower that was amazingly relevant in a nationally-followed court case.

The Devil in Dover - Darwin vs. Dogma in Small-Town America

All of these books are amazing, yes – but wait, there’s more! Intrepid local journalist Lauri Lebo (a.k.a. “Lois Lane”) has reportedly got a book deal of her own. (Added in edit - the working title is: The Devil in Dover - Darwin vs. Dogma in Small-Town America.) Since Lauri was on the ground from the beginning in the Dover area, and is likely all-knowing, we are certain to get something interesting from her. Lebo gave a speech at the Evolution 2006 meeting. Following several of the Kitzmiller participants who all gave academic-type talks with Powerpoint presentations, Lebo stood up and read a remarkable essay about what journalism is and what objectivity means in a journalistic context, and how these issues came up in the Kitzmiller v. Dover reporter’s maelstrom of editors, newspapers, the courts, scientists and PR guys, and the local community. That’s an incredibly dry description of what was actually a quite moving piece, but it gives you an idea. Lebo also has the “fundamentalist relative” issue in her background, which seems to provoke thoughtfulness. I’m also hoping for a segue on the famous Lebo Beer Can Museum.

For those with more academic interests in the case, here are some items to watch out for:

* God on Trial: Dispatches From America’s Religious Battlefields by Peter Irons, a polysci professor at UCSD. According to his description at amazon.com, Irons reviews a number of constitutional battles over church/state separation, and spends a chapter on the Dover case. Coming out May 17.

* The Panda’s Black Box: Opening up the Intelligent Design Controversy – this is an anthology featuring big names including Scott Gilbert, Edward J. Larson, Michael Ruse, and Daniel J. Kevles. I am particularly interested in what Ed Larson has to say about the Dover case, seeing as he literally wrote the book on the legal history of creationism, in his 1985 book Trial and Error. He should understand more thoroughly than most just what an important role this history played in the Kitzmiller case. But we’ll see. Coming out April 27.

* Several other anthologies and books are in the works – Robert Pennock is working on something, as are Wes Elsberry and Ed Brayton. And Nova is working on a documentary featuring reenactments of key scenes from the trial, and Ron Nyswaner of Philadelphia fame is working on a screenplay for Paramount. Heck, if I get into grad school this fall I might have to spend the summer finishing my own writing on the case just so that I can get Kitzmiller out of my system.

Note: There is apparently no actual photo of Gordy Slack anywhere on the internet. This is a photo by Gordy Slack. Imagine a tall guy with black hair taking this photo. That’s Gordy.