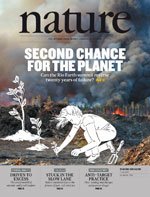 Well, I just got interviewed about this, so I suppose I should blog it! Today a review paper is coming out in Nature entitled “Approaching a state shift in Earth’s biosphere” (Nature, UC Berkeley press release) It is getting a huge amount of press, in part because of the message, and in part because of the upcoming United Nations Rio+20 Earth Summit in Rio de Janeiro.

The message of the paper is that, while much is uncertain, we think that the biosphere – the global community of species and ecosystems – is heading for a “state shift”, or “tipping point”, due to human activity. More on what exactly this means in a moment.

The paper is the product of a 2010 workshop that we had at U.C. Berkeley as part of the campus’s research initiative in Global Change Biology. At the workshop, about two dozen quite famous professors in ecology and evolutionary biology met to discuss ecological and evolutionary theory and what it suggested about the future of biodiversity on a global scale. Somehow or other I got invited as well, despite being neither a professor nor famous. I was told that the attendees of the meeting were so diverse, scientifically speaking – we had everything from paleontologists to food web ecologists, species distribution modelers, population ecologists, geographers, macroecologists and experts on species abundance distributions, marine scientists, geneticists, and more – that the organizers thought it would be useful to have someone with a broad background to take notes and help “translate” between the diverse perspectives present.

The meeting certainly didn’t disappoint in terms of intellectual diversity. Sometimes it almost did seem as if scientists from different specialties were speaking different languages. And when you have 20 scientists in a room, you can expect to have at least 40 opinions present. But one theme that emerged again and again was that biological systems are complex and interlinked with feedback mechanisms, and that this leads to nonlinear behavior.

Typically what this means is that a natural system inhabits an approximately stable state. There are numerous known examples in biology and geoscience. A simple example might be a stable glacier, which is maintained by a balance of input (snow) and output (melt). Small changes in input and output might change the size of the glacier somewhat, but the existence of the glacier is not threatened.

A biological example is an ecological food web. In a food web in a stable state, one predator species usually doesn’t eliminate all the other species, rather, heavily predated species become rare and other more common species become the preferred food item. If a predator is very specialized on a particular key food species which becomes rare, then the population of a predator declines as well. These feedbacks maintain diversity in the food web, and the diversity confers robustness on the system in the face of small changes in the environment or the food web.

So, complex systems in stable states can maintain themselves even in the face of moderate internal or external perturbations. However, these systems are not invulnerable. They can be severely disturbed in at least four ways:

2. Massive external forcing beyond the tolerance limits of a system. An example might be the virtually wholesale replacement of the North American tallgrass prairie ecosystem with plowed agriculture. Another might be fisheries collapse, where a fish population is so relentlessly harvested year after year that eventually it declines to the point where it can no longer recover its original population size, even when fishing is stopped completely.

3. “Death by a thousand cuts” – food webs are often robust in that many of the species (nodes in the web) can be lost or replaced (e.g. by invasive species), while the overall structure is maintained. But, studies show that such systems can exhibit criticality, where a number of nodes can be lost without much impact, but the loss of a few more nodes can lead to a collapse of the system, loss of many more nodes, and a new, impoverished stable state, with just a few nodes in the food web.

4. Negative feedback switching to positive feedback, leading to acceleration of change in the system, rather than resistance to change. A classic example is ice-albedo feedback in the climate system.

With this background, we are in a position to see what is being suggested in the Nature paper. It may be the case that, just as has already been observed in various local ecosystems and food webs, the biosphere as a whole can be thought of as existing in an approximately stable state (since, say, the Last Glacial Maximum), and humans are imposing perturbations on this system at almost every level. The various sorts of perturbations mentioned above in a local context are also occurring globally, e.g.:

1. Even in relatively undisturbed areas, humans tend to remove the large, rare animals first (predators, elephants, bison, seals and sea otters, whales, sharks). These organisms, though rare, tend to structure ecosystems by eating everything else. When they are removed, whatever they were eating increases, causing further impacts downstream.

2. Humans are also engaging in massive external forcing of ecosystems, first by direct conversion (43% of the Earth’s land surface has already been converted to agricultural use) and second by raising the average global temperature, which forces species to either adapt, migrate, or go extinct. Raising the global CO2 level has effects beyond temperature change, notably raising the acidity of the ocean.

3. The various pinpricks that humans make to ecosystems may have minimal impact individually – most introduced exotic species have limited effect, for instance, and cutting down this or that patch of forest may not be hugely important. But as habitats get more and more fragmented, and as a few vigorous weedy species spread wherever humans go, we make it harder and harder for ecosystems to maintain their previous stable states.

4. Although you might think that individual ecosystems on different continents are not meaningfully linked (with perhaps the exception of e.g. migratory birds), the fact is that us humans, with our global economic system, have linked them. If all the forest gets cut down in one country, the pressure on the forests in other countries will increase in order to meet demand. Similar statements can be made about fisheries, agricultural land (note how conversion of U.S. agricultural land to produce ethanol impacted global food prices), and rare species (rhinos in Africa are going extinct because of the Chinese medicine market).

On top of each of the above perturbations considered individually, they are all likely to interact synergistically and increase the pressure on species and ecosystems. And, as the Nature paper points out, if paleontologists’ study of mass extinctions teaches us anything, it’s that while one big perturbation on a system can be bad for the biosphere, it’s the interactions between perturbations that really does a number on things. The K-T impact mostly didn’t kill through the direct impact, rather, it appears that there was widespread interruption of the food chain, such that if you were an animal, your best bet at survival was to be a detritivore.

All of this considered together leads to the prediction of a state shift in Earth’s biosphere, if present trends continue. If this hypothesis is true or even probable, it is important for the public and for policy makers to take it into account.

However, communicating such a concept to the public is a nontrivial endeavor. It is almost impossible to say “Earth’s biosphere is heading towards a tipping point” without being misinterpreted to some extent. The journalist who was interviewing me this morning did not fail to use phrases like “apocalyptic”, “doom and gloom”, and “the end of the world.”*

Such rhetoric has good and bad sides (good: more people pay attention and may take action; bad: the very same rhetoric leads to skepticism and inaction), but wouldn’t it be nice if we lived in a society where mass communication could go at least one step beyond simplified rhetoric, such that people could get at least a first approximation of what scientists have in their heads when they use phrases like “approaching a state shift in the biosphere”?

My suspicion is that the most important step towards improving the communication of science is not to increase the amount of detail thrown at the press and the public. People are busy and most of them are not particularly interested about the details of science. Even in my summary above, to really communicate the details of the scientific ideas involved would require an explanation of all the key words, but after a few sentences about mysterious words like “perturbation” and nonlinear feedback most people would be asleep.

Rather, the most important step might be to anticipate common misunderstandings and exaggerations, and be prepared to correct them. In the interview, I made the following points:

* Does this study predict the world is going to end? No, this study is about the Earth’s ecosystems and biodiversity. The planet Earth will keep circling the sun, whatever we humans do to the life on the planet.

* Does this study predict the end of life on the planet? No, humans couldn’t kill off life on the planet even if we wanted to. Sterilizing the planet to remove all life would require something like melting the Earth’s crust to molten lava and boiling off the oceans and atmosphere, which hasn’t happened ever except near the beginning of the solar system billions of years ago.

* Does this study predict the end of human life? No, but a global state shift in the biosphere could have all kinds of negative impacts on human health, economics, politics, and general well-being. The real question we are raising is not about whether or not life or humans are doomed; the real question is about what kind of world do we want to live in. A state-shift in the biosphere would basically mean a conversion of most of the Earth’s surface to the production of food and energy for humans; a world dominated by cows and corn fields instead of natural ecosystems; a world where humans are fighting each other for ever-diminishing nonrenewable resources while also having to cope with rising temperatures and sea levels, the spread of tropical insects and diseases, and homogenized ecosystems consisting mostly of human-tolerant, easily-dispersable weeds. It would be a world without any wildness left.

* Does this prediction mean this result is inevitable, and thus why worry about it? No, this result is not inevitable. This is a prediction “if current trends continue”. If humans decide to take appropriate action – conserve natural ecosystems, engage in sustainable agriculture and energy production, flatten out population growth and resource consumption, and halt global warming – there is hope that the state shift could be avoided. It’s up to us.

I am interested in comments on both the science and science communication aspects raised by this study. Quotes of interesting media reactions are also welcome.

I should add that the views in this post are mine alone, and not necessarily those of my employer, coauthors, etc. Although they should be.

* To the journalist’s credit, she did give me the time to explain what we did and did not mean in the paper. The network was NTN24 which “airs in all Latin America, the Caribbean and the United States, through different cable systems; in the USA is channel 418 of Directv. We also air in Europe through streaming in the following site: http://www.ntn24.com/senal.html”