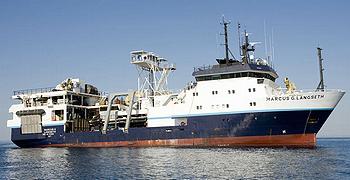 Courtesy the University of Oregon, which reports on Sept. 22nd that

_After 30 days at sea and 16 days of successful seismic surveying of deep-sea hydrothermal ecosystems on the Pacific Ocean floor off British Columbia, researchers from two Northwest institutions have returned to dry land.

Their mission to study the deep crustal structure of the Endeavour segment of the Juan de Fuca ridge had drawn last-minute opposition by environmental groups, who in court filings had sought to stop the seismic surveying because of potential harm to whales and other mammals. A portion of the ridge includes the Endeavour Marine Protected Area that was established to foster conservation and responsible scientific study. Canadian courts rejected the groups’ cases.

Prior to sailing, the project – the Endeavour Seismic Tomography Experiment – underwent a thorough environmental assessment by Canadian and U.S. regulators. The timing of the expedition was chosen to minimize marine mammal encounters. During the survey, certified marine mammal observers monitored the region on a 24-hour per-day basis.

“Not a single marine mammal was either visually observed or acoustically detected during the seismic survey,” said Doug Toomey, professor of geological sciences at the University of Oregon and principal investigator of the National Science Foundation-funded project that was done from the research vessel Marcus G. Langseth._

Update continues below the fold…

_The ship is the academic community’s flagship seismic research vessel and is owned by the NSF. Universities, research institutes and labs use the Langseth to study the earth’s interior below the world’s ocean floors. The Lamont-Doherty Earth Observatory, part of Columbia University, operates the ship on behalf of the NSF.

“Our results will have direct societal benefits, including an improved understanding of the life-cycle of deep-sea vents and on the importance of the Marine Protected Area as a long-term species reservoir for the entire northeast Pacific,” Toomey said. “We are learning about and how the structure of ocean crust and the Juan de Fuca plate contributes to earthquakes, tsunamis and volcanic hazards that threaten the Pacific Northwest.”

Unlike other marine and terrestrial ecosystems, Toomey said, the hydrothermal vent communities at Endeavour are entirely dependent upon heat from a magma body within the oceanic crust as their primary source of energy. “A primary goal of our study was to image these below-seafloor heat sources, or magma chambers, that fuel and sustain the vent fields and their bottom-dwelling communities,” he said.

Scientists from the UO and University of Washington used the ship’s extensive air source array to send low-frequency sound waves to image the structure beneath the seafloor of the region, which is a source of numerous earthquakes. Many of these earthquakes generate sound in the same frequency band as the ship’s seismic array. Earthquake swarms can continue for several weeks.

Information gathered by researchers will prove useful to a major Canadian project, as well.

“This experiment is particularly timely because it provides subsurface geological information that complements the work of the NEPTUNE Canada project at the University of Victoria to install a long-term cabled hydrothermal observatory in the hydrothermal fields” said William Wilcock, a UW marine geophysicist and a co-principal investigator on the project. He also noted that the seismic work went so smoothly that the Langseth was able to spend the last two days at sea mapping the seafloor in nearby regions that are also of interest to the NEPTUNE Canada team.

“Professor Toomey’s project will provide fundamental data complementary to data from NEPTUNE Canada’s cabled ocean observatory, with a node site at Endeavour. Data on 3-D seismic structure of the ocean crust will reveal how magmatic and hydrothermal vent processes sustain the special ecosystems and the relationship between regional plate-tectonic processes and natural hazards such as earthquakes, tsunamis, major slope failures, gas hydrate release,” said Chris Barnes of the University of Victoria in British Columbia and project director of NEPTUNE Canada.

“This project will directly contribute to ecosystem and conservation research at the Endeavour Marine Protected Area,” said Kim Juniper the BC Leadership Chair in Ocean Ecosystems and Global Change at the University of Victoria. Acquiring that information on the sub-surface magma system is essential to determine the stability of hydrothermal vent populations, he added.

Emilie Hooft, a UO professor of geological sciences also participated in the study. She noted: “The academic marine seismic community is one of the most careful communities in the world when it comes to monitoring and mitigating the effects of our seismic sources on marine ecosystems.”

The Langseth operates in accordance with rules and regulations set forth by U.S. governmental entities and laws, and, in this case, Canada’s Department of Fisheries and Oceans._

There have been several other news reports on the completed study, including the Victoria Times Colonist on Sept. 25th: “Seismic surveys produced ‘vital’ results: Team says marine mammals fine, but environmentalists are skeptical”, which featured this bizarre statement by lawyer Lara Tessaro:

And the Sept. 29th edition of TIME magazine, in a piece titled “Is Ocean Seismic Testing Endangering the Dolphins?”, discusses seismic testing by the Langseth off the coast of Taiwan:

For all the “hype on risks to whales from seismic research,” the benefits get little attention, says William Lang, a marine-mammal expert and former program director for ocean sciences environmental operations at the NSF. “The risk to people for not pursuing this type of research is simply not part of the story,” Lang says. In the past, explosives like dynamite were used to create seismic waves. Improvement of recording devices and computer analysis has further decreased the airgun sound intensity required for geological research. Airguns are “the best existing technology to produce the desired type of sound,” he says. Lincoln Hollister, professor of geosciences at Princeton University, also rejects claims that airgun use is correlated with damage to marine life, like lesions to the ears and brains or mass beachings. “In recent years, environmental groups have become increasingly negative about the use of airguns, and efforts have greatly increased to monitor studies,” Hollister says. “Tremendous damage has and is being done to the credibility of environmental groups” and, he adds, their demands are “seriously setting back university-based science.”

During all this, readers of the Thumb have been patiently waiting for EcoJustice to respond to queries made after their initial comments were published here. So far, the followups can best be characterized with the help of this web page.

Courtesy project Principal Investigator Douglas Toomey (U. Oregon), who reports that no whales were harmed during the course of this project:

Scientists from the University of Oregon and the University of Washington have successfully completed ~16 days of seismic surveying at the Endeavour segment of the Juan de Fuca ridge, a region that includes the Endeavour Marine Protected Area (MPA). The Endeavour MPA was established to facilitate scientific study of a deep-sea hydrothermal ecosystem. Results of the environmental research will have direct societal benefits, including an improved understanding of the life-cycle of deep-sea vents, of the importance of the MPA as a long-term species reservoir for the entire northeast Pacific spreading ridge system, and of how the structure of ocean crust and the Juan de Fuca plate contributes to earthquakes, tsunamis and volcanic hazards that threaten the Pacific Northwest.

The seismic surveying used the full 36-element, 6600 cu. in. airgun array of the R/V Marcus G. Langseth. Prior to sailing, the survey underwent a thorough environmental assessment by Canadian and U.S. regulators and the timing of the expedition was chosen to minimize marine mammal encounters. During the survey, certified Marine Mammal Observers monitored the region on a 24-hour per-day basis. Not a single marine mammal was either visually observed or acoustically detected during the seismic survey.

The low abundance of marine mammals in this region comes as no surprise to knowledgeable experts. Nevertheless, prior to conducting this successful environmental research, activist groups including EcoJustice, the Living Oceans Society and the Canadian Parks and Wilderness Society repeatedly claimed that the Endeavour MPA was a refuge for whales. These erroneous claims were propagated by individuals with a poor knowledge of the habits of marine mammals and a poor grasp of the established practices for permitting research that benefits society as well as the conservation, protection and understanding of a Marine Protected Area.

Rex Dalton reports on a new case in the 18 August 2009 issue of Nature:

An environmental lawsuit is threatening the departure of a long-planned, US$4.7-million research cruise to image sea-floor structures off the coast of western Canada. The RV Marcus Langseth, a vessel operated by Columbia University in New York for the US National Science Foundation, had acquired all its permits to depart on 21 August for the Endeavour hydrothermal vents, 250 kilometres southwest of Vancouver Island. But on 10 August, the Canadian activist legal group Ecojustice, in Vancouver, British Columbia, sued the university, the Canadian department of fisheries and oceans and the minister of foreign affairs, alleging among other things that proper procedures were not followed in assessing how the seismic air bursts set off during the cruise would affect marine life.

I heard about this from project scientist Lincoln Hollister (Princeton), who commented on a related story in the Times Colonist (August 13th):

It’s a standard ploy by environmental groups to go to court to stop a project by legal fine print rather than by reason of science. The project they wish to stop is designed specifically to understand the plumbing system of the seabed volcanic vents ecosystem of the Endeavor Marine Protected Area. It is led by Professor Toomey at the University of Oregon; it would not damage marine life. The environmental groups have known of the pending study for over a year and a half; however, they waited until the research vessel was about to begin the study to announce by press release and application to the court the reasons they are against it. They did not submit their objections for open scientific review. With experienced lawyers, and with judges unfamiliar with the issues, they may succeed in court where they failed in consultations. Maybe after the judges, and the public, become aware of what has been lost by killing the academic research project, they will lift the injunction, but by then it will be too late. The ship will have moved on to other academic studies, elsewhere on the globe. In this case, there are no winners.

Once again, science gets the short shrift in the media and the court system. Hollister tells me that “I think the campaign would be helped by input in the press from Canadian scientists.”